Great news for Tam Valley residents:  Mill Valley Patch reports that the long-vacant market at Tam Junction is soon to be occupied by Sprouts Farmers Market.  The store was previously occupied by DeLano's, who went out of business and closed the store in 2010. 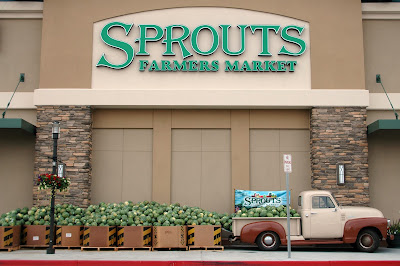 Sprouts is a fast expanding chain of grocery stores that first expanded into Northern California in 2010.  The focus is on fresh produce, with a range of conventional and organic lines, together with other basic grocery items.
Posted by Nigel at 9:55 AM 1 comment:

Dozens of new stores open in San Rafael (actually only one: Target)

This weekend I went for a first look at the great new clothing store in San Rafael.  Then I visited the new shoe store, and also checked out the new sporting goods store, the new toy store, home furnishings store, electronics store, music store, book store and cycle store.  Oh, and then I picked up some groceries at the new grocery store and a few items at the new pharmacy, and took a well-earned rest at the new coffee shop.

Of course, as you have probably guessed, all these new stores are actually components of just one store, the gargantuan Target Supercenter, that now sits by the edge of San Rafael Bay next to that other great retail megastore, Home Depot. 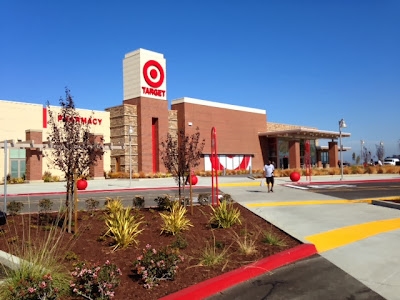 And very pretty the new store looks too, with abundant plantings and brightly painted curbs in the car park, and a quite stunning vista overlooking the Bay, best appreciated from one of the comfy couches in the Starbucks concession. 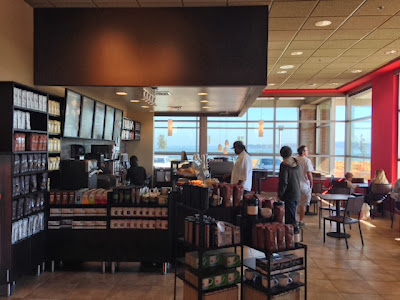 Inside the store is shiny and bright and very familiar to anyone who has ever been in a Target store. The staff are friendly and efficient and the shelves are well stocked. 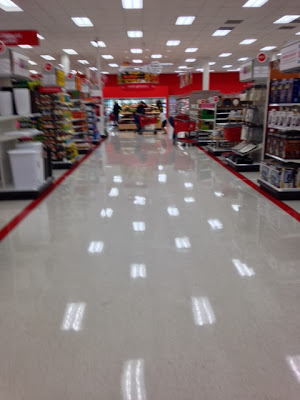 And because it is a Supercenter you can buy everything you need here, which is great news for those people in southern and central Marin that like shopping that way, but not so great news for the owners of other stores in the area whose sales will shrink as a result.
Posted by Nigel at 1:10 PM No comments:

Paradise Foods has recently opened at The Cove Shopping Center in Tiburon.  More than four years after the old DeLano's Market closed it's doors the residents of 94920 have finally been rewarded for their patience.  The store is light and airy, with Paradise Foods' characteristic hardwood floors, nicely-presented displays, and very smart checkout staff. 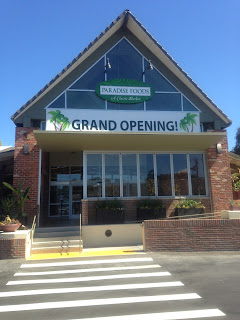 As with the other locations, expect to see most of the action around the deli counter and the excellent range of pre-prepared foods, including the great entrees that are made in the kitchen.  This store also has a burrito bar.
Posted by Nigel at 10:51 AM 1 comment:

It's taken a long time, but it looks like the retail sector in Marin has finally recovered from the recession.  In April the 3-month rolling average 1% sales tax distributed in Marin County was $2.75M, the highest level for six years. 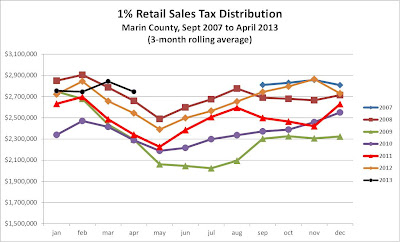 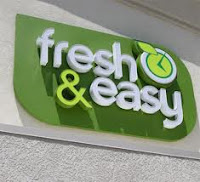 Fresh & Easy, the West Coast US small-format market, is to be sold.  As expected, the store's British owners, supermarket giant Tesco, have decided to cut their losses and exit the US.  An announcement today on the store's website stated:


As many of you have heard or read today, our parent company Tesco updated on the future of Fresh & Easy.  While we don’t yet know who our new owner will ultimately be, Tesco has already received interest from a number of parties including groups looking to purchase Fresh & Easy as an operating business.  We appreciate all the support and love we’ve received from our loyal customers and even though our parent company plans to leave the US, we’re pleased to confirm there are no plans to close any portion of Fresh & Easy.

Fresh & Easy had bad luck from the start, launching the operations in southern California, Arizona and Nevada just as these areas were being impacted by the housing crisis and recession. .  As they aggressively rolled out the concept, they made poor real estate decisions that resulted in store locations in the wrong areas for their target demographic. The concept was different from their competitors, but not in a way that appealed to customers. The use of self-checkouts and the heavy reliance on obscure or home brands were not popular with US shoppers.

The chain had just begun its expansion into the Bay Area when it announced its review of operations last year.  Plans for its first Marin store at the Cove Shopping Center in Tiburon were hastily abandoned (the site is now to be occupied by local operator Paradise Foods).
Posted by Nigel at 1:42 PM No comments:

Email ThisBlogThis!Share to TwitterShare to FacebookShare to Pinterest
Labels: Fresh and Easy, The Cove Shopping Center

It passed under the radar earlier this year, but the ownership of the property currently occupied by Lucky's Market in downtown Larkspur changed hands in March. The new owner, who picked up the property for just $4.0 million, is Vons, otherwise known as Safeway.

Growth, or the lack of it, in retail sales, and what it says about the economy, is in the news again, with strong growth in sales reported in some sectors and weak performance in others. During the recession, total US retail sales fell from $340bn in 2008 to $295bn in 2009, then recovered back to pre-recession levels in early 2011, growing further to $360bn in April 2012. However, total sales have fallen in the last three months as the economy slows and consumers cut back on spending. 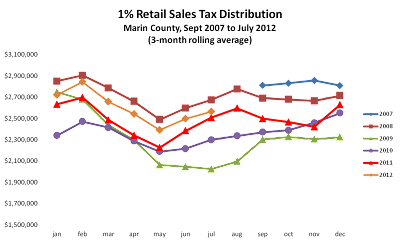 In Marin County, the recovery has not fully materialized. Based on retail sales tax data from the State Board of Equalization (see chart at right), retail sales in 2012 are tracking above 2011, but are still below 2008.

In this respect, Marin is out of line with most of the Bay Area. 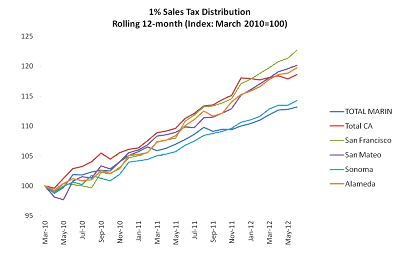 Looking at retail sales tax growth since March 2010, which was when retail sales started to recover, Marin, and to some extent Sonoma, are lagging behind the major Bay Area counties and California as a whole.

What is holding back the recovery in Marin? Below are some possible reasons: 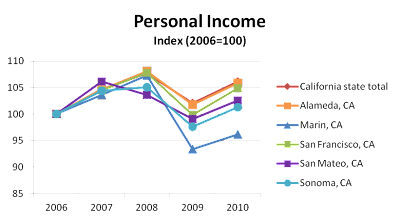 1. On the demand side, consumer spending has not recovered. Marin took a big hit from the recession. Total personal income in Marin County fell by over 13% in 2009, a much steeper drop than elsewhere in the Bay Area. Data beyond 2010 is not yet available, but it's very possible that income growth in Marin has yet to fully recover, which would help explain continued retail weakness.

2. On the supply side, tight market conditions have restricted the ability of new and innovative retail formats to start up and grow in Marin. In a recovery, consumers often need to be tempted to open their pocketbooks and start spending again, and that temptation is best provided by new and fresh retail formats. Marin County has one of the lowest retail vacancy rates in California, and also higher than average rents, which means it's tough for retailers to find high quality and affordable space.

3. Internet shopping. The growth of electronic commerce continues to impact traditional retailers, almost killing off whole categories, such as books and music, and cutting into the margins of others. In the US, online retailing is growing at an average annual rate of over 15%. It is very possible that Marin's combination of high average incomes and limited retail supply make online shopping a significantly attractive option.
Posted by Nigel at 12:27 PM 1 comment: